DNA is made up of long strings of nucleotides. There are four nucleotides in DNA: Adenine (A), Thymine (T), Guanine (G) and Cytosine (C). These nucleotides are held together by a phosphate-sugar “backbone” and are complemented by a parallel strand of nucleotides making a DNA molecule “double-stranded”. Parallel strands are held together by hydrogen bonds between bases; Adenine binds to Thymine, Cytosine binds to Guanine. Discrete sections of DNA carry sequences of nucleotides that, when processed, are responsible for proteins or functional RNA chains. These sections are called genes. When making a protein, the DNA is first transcribed into a single-stranded piece of messenger RNA (mRNA) using an enzyme called RNA polymerase. The newly made mRNA is then translated through a ribosome into a long chain of amino acids. This chain of amino acids folds up to make a functional protein. Proteins build the organism, including all measurable and observable characteristics. 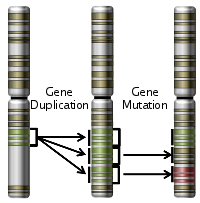 In the case of monkeys, the SWS opsin gene is located on an autosome (non sex chromosome) – chromosome #7. The MWS and LWS opsin genes are located on the X-chromosome. In many primate species there are many non-functional copies of the MWS gene found on the X-chromosome. This indicates that there were duplication events of the MWS gene that occurred many times throughout the history of trichromat monkey species. One of those MWS copies accumulated a few specific DNA nucleotide substitution mutations, which gave rise to an LWS opsin gene that encoded a functional LWS opsin protein. In essence, only three specific mutations were needed over tens of millions of years in order for a functional LWS gene to successfully evolve. 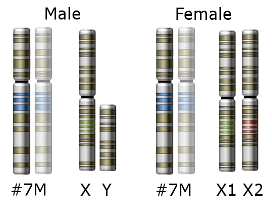 Because the MWS and LWS genes are on the X chromosome, females have two copies of each whereas males have only one of each. New world monkeys usually only have the MWS gene, lacking the LWS gene. Nonetheless, some new world monkey species have some trichromatic females and only dichromatic males. This occurs when there are different variants (i.e. alleles) of the MWS gene, one on each X chromosome, that are spectrally tuned to different wavelengths. Females that have two MWs alleles are therefore trichromatic. Females that have only one allele are dichromatic. Males can only be dichromatic because they only have one x-chromosome.